The mission of the Board of University and School Lands is to prudently and professionally, manage assets of the permanent trusts in order to preserve the purchasing power of the funds, maintain stable distributions to fund beneficiaries, and manage all other assets and programs entrusted to the Board in accordance with the North Dakota Constitution and applicable state law.

The Department of Trust Lands is known nationally for superior management of its land and mineral assets, unclaimed property, energy grant distributions, and investment portfolio. 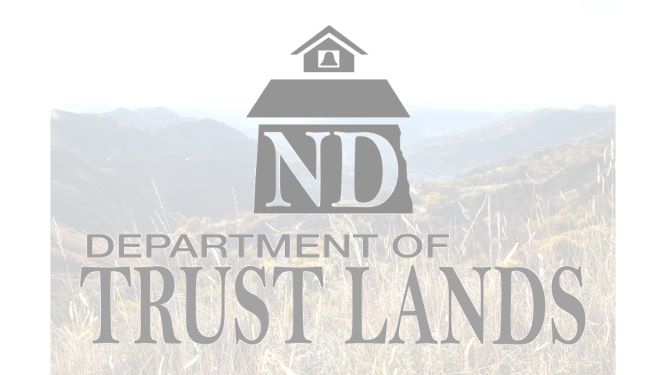 In 1889, Congress passed the Enabling Act “to provide for the division of Dakota [Territory] into two states, and to enable the people of North Dakota, South Dakota, Montana, and Washington to form constitutions and state governments, and to be admitted into the union on an equal footing with the original states, and to make donations of public lands to such states." Act of February 22, 1889, Ch.180, 25 Statutes at Large 676. Section 10 of this Act granted sections 16 and 36 in every township to the new states "for the support of common schools." In cases where portions of sections 16 and 36 had been sold prior to statehood, indemnity or "in lieu" selections were allowed. In North Dakota, this grant of land totaled nearly 2.6 million acres.

The Enabling Act provided further land grants to the State of North Dakota for the support of colleges, universities, the state capitol, and other public institutions. Revenues are generated through the prudent management of trust assets, which assets include approximately 706,600 surface acres and nearly 2.6 million mineral acres.  Article IX, Section 2 of the North Dakota Constitution that the “net proceeds of all fines for violation of state laws and all other sums which may be added by law, must be faithfully used and applied each year for the benefit of the common schools of the state and no part of the fund must ever be diverted, even temporarily, from this purpose or used for any purpose other than the maintenance of common schools as provided by law.”

To Thomas Jefferson (Jefferson) education for all the children of the United States was the key to creating a strong democracy. Jefferson’s idea was to look for a way to fund education by using the land to generate funding. With approval of the Enabling Act in 1889, Congress granted North Dakota the ability to become a state. The Board of University and School Lands (Board) is part of that Act, making it an agency that predates statehood.

The Enabling Act, the North Dakota Constitution, and statutes passed over the last 130 years, have defined the role of the Board and its beneficiaries.

The Board – consisting of the Governor, Secretary of State, Attorney General, Superintendent of Public Institution, and State Treasurer – invests the revenues generated from the trust lands into a diverse portfolio of financial assets. Educational and other institutions are the primary beneficiaries of the various permanent trust funds, pursuant to Article IX of the North Dakota Constitution.

The Commissioner of University and School Lands (Commissioner) is appointed to act on the Board’s behalf. In 2011, the Board adopted the name “Department of Trust Lands” as the common reference for the office of the Commissioner. Prior to that time, it was informally called the “State Land Department.”

The North Dakota Department of Trust Lands (Department) serves as the administrative agency of the Board and Commissioner. Along with being responsible for the management and stewardship of educational trusts, the Department oversees mineral acres and other assets utilized for the benefit of public schools and other institutions in North Dakota. The Department operates the state’s Unclaimed Property Division and the Energy Infrastructure and Impact Office.

Over the years, several constitutional amendments and legislative changes have affected the economic landscape. Despite these changes, the Board and Department have maintained stable investment returns, expanding income sources, and sensible maintenance of real property, with trust beneficiaries and all North Dakota residents benefiting from the efforts of the Board and the Department.